AVN of the hip

Avascular Necrosis AVN of the Hip 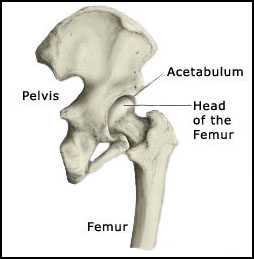 Anatomy of the hip

The hip is the most common joint for avascular necrosis AVN, accounting for approximately 90% of all recorded cases.

The hip joint is one of the true ball-and-socket joints of the body. The hip socket is called the acetabulum and forms a deep cup that surrounds the ball of the upper thigh bone. The thigh bone itself is called the femur, and the ball on the end is the femoral head. Thick muscles of the buttock at the back and the thick muscles of the thigh in the front surround the hip.

The surface of the femoral head and the inside of the acetabulum are covered with articular cartilage. This material is about one-quarter of an inch thick in most large joints. Articular cartilage is a tough, slick material that allows the surfaces to slide against one another without damage.

All of the blood supply comes into the ball that forms the hip joint through the neck of the femur (the femoral neck), a thinner area of bone that connects the ball to the shaft. If this blood supply is compromised, there is no backup. Loss of blood supply can cause death of the bone that makes up the ball portion of the femur. Once this occurs, the bone is no longer able to maintain itself.

What happens when Avascular Necrosis AVN osteonecrosis strikes
Living bone is always changing. To maintain a bone’s strength, bone cells are constantly repairing the wear and tear that affects the bone tissue. If this process stops the bone can begin to weaken, just like rust can affect the metal structure of a bridge. Eventually, just like a rusty bridge, the bone structure begins to collapse.

When AVN occurs in the hip joint, the top of the femoral head (the ball portion) collapses and begins to flatten. This occurs because this is where most of the weight is concentrated. The flattening creates a situation where the ball no longer fits perfectly inside the socket. Like two pieces of a mismatched piece of machinery, the joint begins to wear itself out. This leads to osteoarthritis of the hip joint, and pain.

Normal X-ray and abnormal MRI scan Stage 1.
Normal X-ray and abnormal MRI scan.
In this stage, X-rays are within normal limits, but MRI indicates AVN. Showing injury and death of marrow and bone cells with resultant changes in and around the area of involvement, before they are visible by x-rays.
The percentage of the abnormal femoral head on the MRI can be calculated by a computer program, such as ANALYSE, or an approximation can be made from estimating the average area of abnormality seen on serial MRI cuts. Such quantification cannot be done from a bone scan.

Showing cystic and sclerotic changes on X-ray.
Stage 2 Showing cystic and sclerotic changes on X-ray
X-rays show definite changes consistent with AVN, such as alternating areas of radiolucency and sclerosis, at times demarcated from normal bone by a sclerotic border. This demarcation signifies repair; the sclerotic appearance is due to new, living bone laid down on old, dead trabecular. Areas of radiolucency represent bone resorption; they are often filled with fibrous or granulation tissue, amorphous debris, and even cartilage.
The head of the femur is still spherical.
Surgery is possible / desirable. Core-decompression possible. Adult stem cell surgery possible.

Subchondral collapse producing a crescent sign
Is this stage the femoral head starts to fail mechanically, the femoral head itself is still spherical, and it is therefore theoretically possible to preserve its shape by bone grafting or other procedures.
This is defined by the appearance of a radiolucent crescent sign just beneath the subchondral endplate of the femoral head, indicating the collapse of the cancellous (spongy) trabecular without flattening of the articular surface.
The crescent sign does not always develop during progressive involvement and may often be visible only on the anteroposterior or the lateral film.
Only a small percentage of hips fit the criteria for stage 3, but we consider that this should not be combined with the more advanced finding of flattening of the femoral head.

In this stage, there is a definite flattening of the articular surface, seen on either the AP or the lateral radiograph. The collapse is usually in the anterolateral or superior weight-bearing segments of the femoral head. Small amounts of collapse may not show up on plain x-rays but may be detected by a CT scan. These methods are hardly used, but they should be considered when x-rays show no evidence of collapse and the patient experiences more than the anticipated amount of pain and disability. The acetabulum appears radiologically normal at this stage, but observations at operations confirm that there is often some degeneration in the acetabular articular cartilage.

This transition from stage IV to stage V has some therapeutic importance, since replacement of the femoral head may be considered in stage 5. but total hip replacement is required once there is definite acetabular involvement.

Treating avascular necrosis AVN of the hip
Although rest and the exercises can sometimes heal the affected portion of the bone, surgery is usually needed.

In patients with early stages of the disease, a procedure called core decompression can spark regeneration of the bone. In this procedure, the surgeon drills out the damaged section of the bone up to the head of the femur. This opens up channels for blood vessels to reach the diseased area and foster the production of new bone. Hip pain is relieved, so avoiding joint replacement later on.

Early in the disease, osteotomy (cutting and realigning bone) has been used to redistribute weight, and prevent the collapse and deformation of the femoral head. In patients with large areas of dead bone, however, osteotomy may hinder bone healing. In those patients, total hip replacement is the treatment of choice.

We use cookies in order to give you the best possible experience on our website. By continuing to use this site, you agree to our use of cookies.
Accept